I last blogged a couple of years ago (yikes!) about a free reference manager called Mendeley. Since then, and particularly since Elsevier’s acquisition of Mendeley, I had been on the lookout for a reference manager that could integrate with Google Docs to facilitate collaborative writing.

My non-academic but wonderfully resourceful partner suggested I try out Paperpile, a web-based reference manager. They offer a 30-day trial, after which they charge $2.99 per month*. I’ve been really happy with my experience, so much so that I am actually investing the time to write about it! There are two awesome features that I describe below.

The other reason that I am choosing to write about it is to (maybe) help those in Academia that are generally resistant to change and/or may be unaware of the latest and greatest tools; I am generally such a person, but having a partner in Tech has made me much more open to trying out new software and not regarding it as “wasting precious time”, as well as much more appreciative of the quickly changing landscape of software and that one ought try out new things to not be left behind. Thanks, Doubov!

To start, the interface for Paperpile is clean and simple. 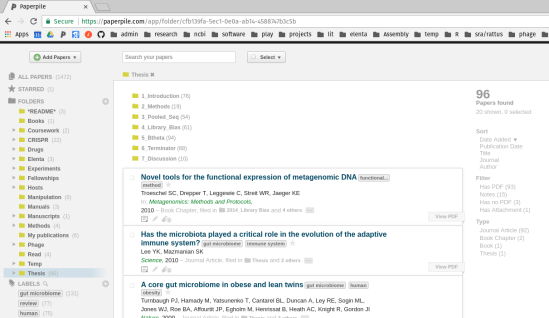 This might be the best feature of Paperpile, possibly because I never expected that something so awesome could exist. Using the Chrome plug-in, articles and associated metadata can be added from search results to your collection with a single click. This is available for many databases, including Google and Pubmed: 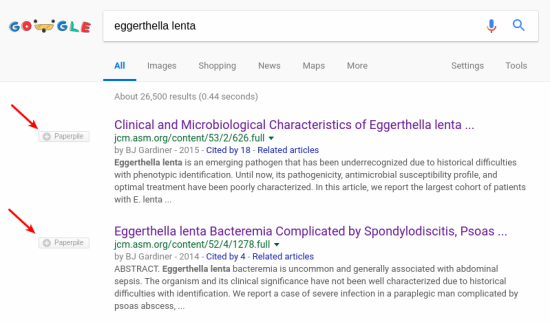 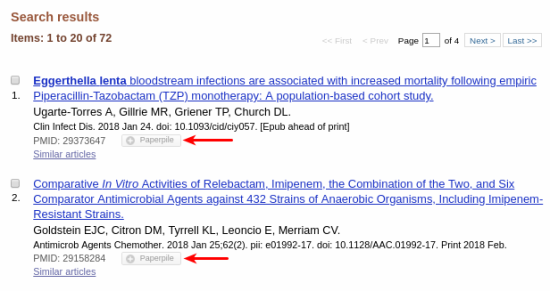 The one-click download can be a problem for pay-walled articles (yet another reason to support open access!). However, if your institutions allows authentication off-campus, Paperpile has implemented a tool to add a proxy connection:

The main reason I wanted to switch reference managers was to have a way to cite in Google Docs. As far as I know, Paperpile is the only tool that currently allows this. You can insert a citation from the menu, and search your library in the dialog box that appears: 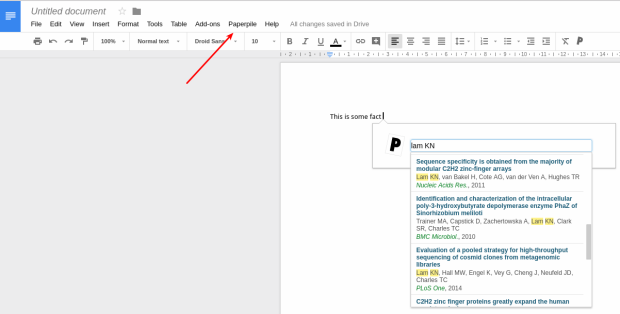 And of course, there is a range of citation styles from which to choose: 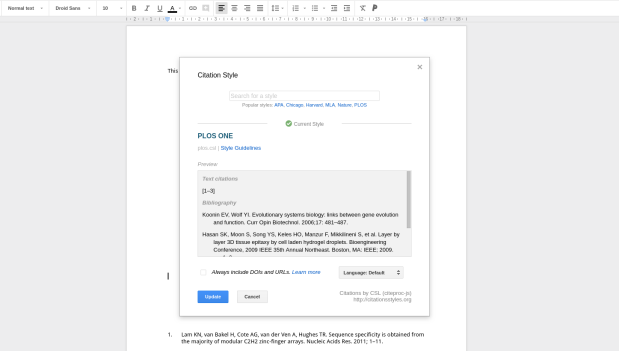 There are a couple of other things that I want to mention.

Migrating a library to Paperpile. This was seamless. The folks at Paperpile have excellent instructions on how to do this, and I don’t remember there being any hiccups.

Enabling the PDF annotator. This feature is currently in beta (I had to manually add it in settings), but it provides all the functions that I typically use, including full text search. Also, notice the 4-colour highlighting options as well as the letters/numbers indicating keyboard shortcuts to switch between annotation tools (gosh, I love hot keys): 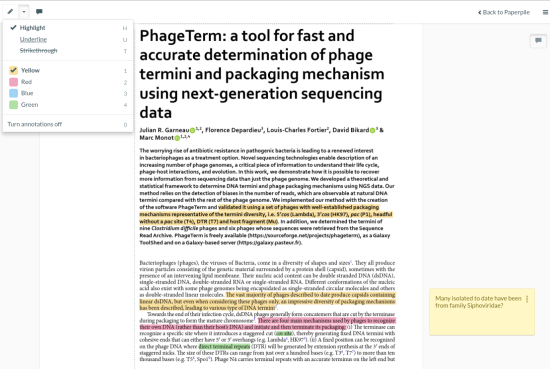 The only feature that I have really missed is full text search: even though text search is available within the PDF viewer/annotator, it is not yet possible from the main Paperpile app. The current implementation of main search only searches the title, abstract, and other metadata, such as author. The software is constantly being improved though, and according to the Paperpile forum, the full text search feature is underway.

A second shortcoming is not particular to Paperpile but rather is a general design philosophy that I struggle to cope with in general. It is the use of dynamic menus — either options that aren’t obvious until something is selected or options that appear only when the user hovers over an object. This can sometimes be unintuitive; for example, the main menu items only appear after a paper(s) is selected.

I don’t agree with this philosophy; I think options should be grayed out rather than simply absent, but what do I know, right? I’m just an underpaid academic in the life sciences who blogs about tools when she has lots of work that needs doing. 😉

These two issues are relatively minor considering the great number of features that Paperpile has to offer, and especially that development is likely being done by a small (but clearly awesome) team. Thank you Paperpile for a making a great tool!